Will the iPhone 6 be announced soon?

Rumours seem to be about that a new iPhone will be released with fingerprint scanner as well as a low end iPhone.

Apple seem to be struggling to keep pace with the innovation of companies like Samsung, Nokia and Google in the Android and Windows Phone arenas where new features are constantly being added from auto scrolling of text to 41 Mp cameras in the latest Nokia phones.

Will Apple step up to release an iPhone 6 or just refresh as an iPhone 5S?
Posted by J Drew at 06:07 No comments: 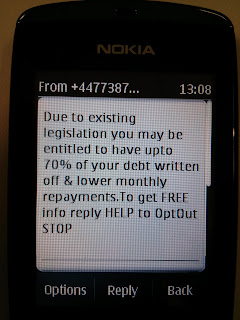 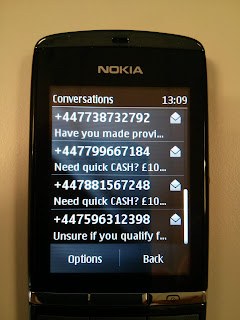 
URGENT: Your pension is under performing and you have lost thousands on your pension. For a free review reply REVIEW.

This message is totally fake and a complete scam. They have no knowledge of whether the recipient actually has a pension or not.

Met police and the Fraud squad recently raided offices in London linked to pension scams allegedly ripping people off by transferring pensions into fake companies and pocketing huge commissions in the process.

Scam SMS text messages sent out from the following numbers.

The second name for Whos on Heart has been guessed today and the listener won £20,000. The next person who names all 3 celebrities will win a massive £125,000!

The correct names are David Duchovny and Jamie Bell

You can check all the names already guessed here
Posted by J Drew at 05:58 No comments:

The latest rumours from the Apple camp are all about an iPhone 6. The new iPad 4 has been released with a 128Gb capacity so it is suggested that this will also be the largest model in the new iPhone 6 range.

The suggested release date for the iPhone 6 is Spring 2013 which would be somewhat earlier that the more usual release times of June each year.

With the success of the Google Nexus 4 and recent announcement of the Samsung Galaxy 4, Apple have some catching up to do to bring the iPhone 6 back to the best in class and to introduce some unique features now that Google and Samsung seem to be leading the smartphone innovation battle.

First Winning name for Whos on Heart 2013 is David Duchovny

What was the first winning name on Whos on heart 2013?

The first correct name has now been guessed for Whos On Heart competition 2013. By a process of deduction the correct answer for one of the Whos On Heart 2013 voices is:

David Duchovny
The listener who guessed the first Whos On Heart winning name has won £10,000! If you guess the next correct voice as well as David Duchovny then you will win £20,000!

I've created a list of guesses already made for Whos on Heart 2013 so you can check before you call.
Click here to Search List of 2013 Whos On Heart Guesses﻿﻿﻿
﻿
﻿﻿
I might post the name that I'm convinced one of the celebrity voices is - the person saying Whos! I've even found an interview where they say the word Whos!
﻿
﻿
﻿﻿﻿

Labels: what was the winning name on whos on heart


The Google LG Nexus 4 is my first Android phone so I am just getting used to the features that come from a Google connected device. All my online & cloud apps are with Google and I was one of the first to have a Gmail account in early 2004 when the service was invitation only and still in Beta.
﻿
The integration of the phone and Google Apps is brilliant and one feature that I'm loving is the ability to push apps to the phone from your PC without any wired connection. Choose an App in the Google Play store on your PC, select the install option and it will be sent directly to your phone with no further intervention - FANTASTIC!

If only other phones were as easy to use!

Are you looking for the cheapest Google Nexus4 gel cases or wanting to find the best case for your new Google LG Nexus 4?

Having just bought my Google Nexus4 Android phone I wanted to make sure that it was properly protected and avoid that lovely glass back from being smashed. I have previously used an Ebay shop called Gadget Hut for chargers so had a look at their offerings.

They have a gel case for the LG Nexus4 at only £1.95 including P&P and in a variety of colours. It has just arrived and is brilliant, fits perfectly and is amazing value for money. I chose the translucent blue case but having seen how good it is I will be ordering a spare too. £1.95 is an excellent price to be able to protect your Nexus4 and I have found gel cases in the past have resisted significant impacts that would have otherwise destroyed the phone.
﻿
The item is on the link below but depending on their auctions may no longer be available

Luckily I didn't wait for the Google LG Nexus 4 to be available again at the Google Play store. It was out of stock last week and remains so now. No such problems with Phones4U, I ordered the Nexus 4 on Friday and the courier delivered it direct to the house the following Tuesday.

﻿
After using the Nokia Lumia 800 Windows 7 phone recently and the iPhone 3GS before that my first impressions of the Google Nexus 4 is wow! The speed of the phone is amazing with no lag at all between opening apps or switching pages. The 2Gb of memory clearly makes a massive difference along with the quad core Snapdragon processor. Google apparently aimed for a smooth experience like butter and have certainly achieved that.

The Nexus 4 fits well in your hand although not quite as comfortably as the Nokia Lumia 800 which had perfectly positioned buttons for turning the phone on and off when held in one hand.

The screen is excellent and incredibly sharp and crisp with very easy to read text. Despite the larger 4.7" screen size the Nexus 4 is actually lighter than the Lumia 800 at 139g compared to 142g for the 3.7" screened Nokia Lumia 800. The Nokia Lumia 920 with its smaller 4.5" screen actually tips the scales at an incredible 185g.

After a few days the battery is also performing brilliantly; unlike the Lumia and iPhone 5 it seems to be no problem making it through a whole day without needing a recharge. The refreshing change is that a standard mini USB cable can be used to charge it but more importantly plugging the Nexus 4 into your PC allows you to copy music and data directly to it in contrast to the locked down iPhone and Nokia Windows devices.

The Nexus 4 smartphone from Google made by LG is still unavailable at the Google Play store but is one of the best value smartphones available for the features at this price.

I've found that the cheapest way to get a Nexus 4 is to buy on contract which actually works out at £100 less than buying direct from Google Play.

I'm currently on a SIM only deal with Vodafone at £20.50 per month. The LG Nexus 4 from Phones4U is available at £29 per month with no upfront cost for the phone for a 24 month contract.

Best of all the Nexus 4 is actually in stock and available from Phones4U unlike Google Play and is due for delivery in 2 days time!
Posted by J Drew at 04:21 2 comments:

Having now used the Nokia Lumia 800 Windows phone for 3 months the problems and frustrations of the phone have become more apparent. While I love the People hub and the fact the phone can let you send text messages while you are out of coverage and they will be delivered as soon as a signal becomes available (unlike the iPhone!) there are a number of issues that really let the phone down.

Something that has only become apparent since switching to the Google Nexus 4 is that with the WP7 you are constantly swiping the screen to access things because the icons are much larger and you cannot divide them into different screens. On an Android phone or iPhone you have so much more screen space available and can move across screens.

1) No way to search content on the phone such as SMS text messages.

I get a lot of text messages. Many are not from or to anyone who I have contact details stored for so if I want to find a message I need to search. Except on Windows Phone 7.5 (and also on the new WP8) searching is not something that is possible.

So if I want to find a message from someone about a specific subject I have to search - manually - through all my messages in order to find it. Not good and something that is easy to do on both Android and iPhone so missing it from the latest Windows Phone 8 release is a major mistake Microsoft!
﻿

On WP7 it isn't possible to get a screen shot from anything running on the phone other than by using a camera to take a picture of it. Standard on Android and iPhone and another serious ommission although apparently this is now available in WP8.

On WP7 and Windows Phone 8 the design theory is to keep the screen clear and uncluttered. Unfortunately that also means not displaying the signal strength unless you are on the home screen and tap the top of the screen. SO being able to check if an app is running slowly due to the poor mobile signal is not possible without switching back to homescreen and back to app again.

As a heavy Facebook user for business and personal, the FB app for WP is poor and way behind the standard of the iOS or Android versions. This might be fixed at a later date but isn't much help now.

Unfortunately despite the benefits from Nokia Lumia Windows Phone I've now decided to switch to Android and a Google Nexus 4 is now on its way to me
Posted by J Drew at 07:31 No comments:

After the deluge of SMS Text messages claiming you have cash waiting for PPI claims, the latest SMS text scam being sent out says that you can write off 70% of Debt.
﻿


These are spam/scam messages being sent out. There is no connection to the person receiving the message and they have no way of knowing if you are in debt and if any debt could be written off.

If you are worried abnout paying your monthly bills then don't be, you can write off up to 70% of your debt before you start struggling. For free info reply DEBT.

The message is completely fake - you cannot automatically write off 70% of your debt and if you do so then your credit rating will be severely impacted.

You may be report these messages to your provider. The following links may help:

Vodafone – How do I report spam text messages? Forward the spam message to VSPAM (87726).

Orange – Stop spam text messages. If you are on Orange and get spam messages, please forward them to 7726 free from your Orange phone. By doing this you are helping Orange to collate information to help reduce spam messages being sent to you and others.

02 also allow you to report on 7726. See: SPAM and unwanted subscription texts

You could also try forwarding the message onto 7726 if you are with T-Mobile or Three.
Posted by J Drew at 01:05 No comments: